We tried Goat Simulator 3, the most fun and ridiculous game you can play in 2022: the words of the goats who played it!

Have you ever tried looking a goat in the eye? Looking at these rectangular pupils, we are sure that your eye will not be able to see anything. No one knows what goes on in a goat’s head, because goats are unpredictable, bizarre and chaotic animals. This may seem like a strange theory, but Goat Simulator 3 only confirms this hypothesis. During Gamescom in Cologne, we tried this crazy sandbox experience, witnessing the funniest things we’ve ever seen in a video game…because goats are creepy animals, but very cute at the same time.

In our tried Goat Simulator 3 We’ve compiled all the information you need to know before playing Sheep Odyssey, coming to PC and consoles starting November 17th. 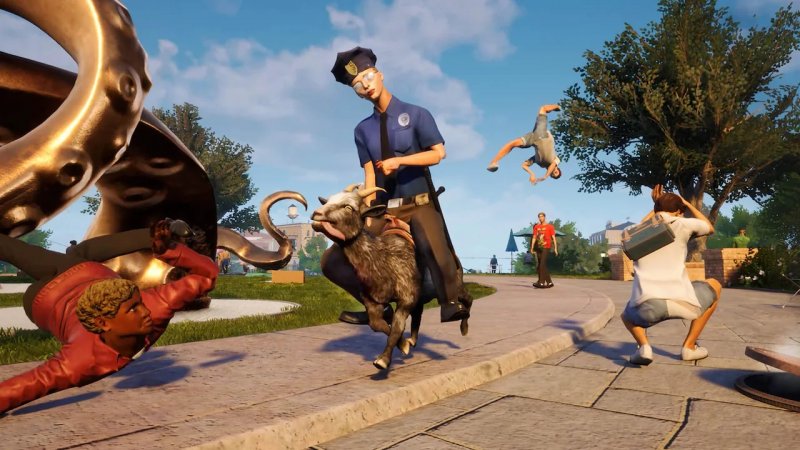 As in the previous chapter, the player will wear soft goat skins while jumping inside open world vast and densely populated. During our game session, we focused on exploring one part of the map, but when you open the menu, you immediately realize that the game world is very huge.

It’s not just the size map, but above all how densely populated it is: NPCs and goats, buildings to visit, activities, missions and more. On first launch, the map will not be fully visible, but the player will have to discover new areas through exploration. Campaign missions also work the same way, with the guys at Coffee Stain, the game’s developers, emphasizing that Goat Simulator has a small beginning, a light story that acts as a thread, and a narrative ending. arc.

To continue the adventure, the sheep will essentially be asked to explore the map: walk past an area where missions offer, they will automatically become part of our goals. All very simple actions that do not require too complicated dialogues or explanations.

Scattered across the map goat towers, buildings that, after being activated, will make part of the same visible… no sheaves of straw placed under the highest eaves of the building, but the parody of Assassin’s Creed seemed quite understandable to us! The towers also need to be visited inside in order to access the mission center: inside the towers we will always find a huge door, closed with several locks, which we can open during the course of the adventure by completing missions. 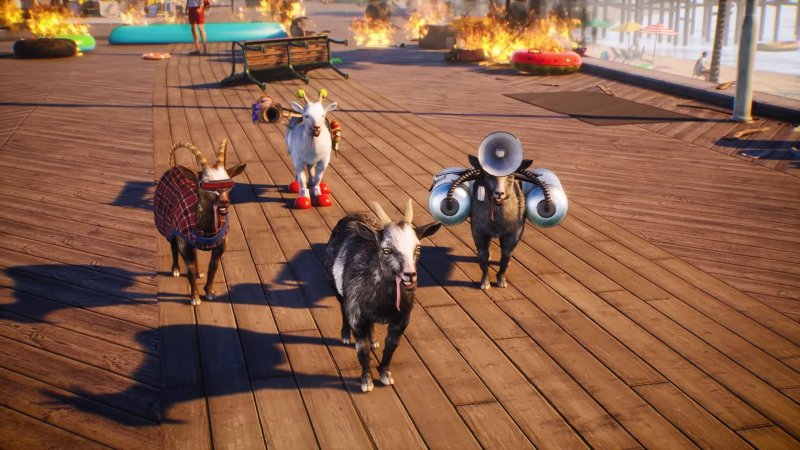 Among the upgrades that can be equipped will also be jetpacks.

As mentioned, exploration is necessary to complete the game, but jumping across the vast empty space would be very boring. As you might guess, this is definitely not the case with Goat Simulator 3, which provides goats with a long range of items to use in the sandbox, starting with skills each individual sheep. Each goat is essentially able to perform a jump with a further bounce on the surface hit after the first jump, butt, hindquarter kick, and sticky lick, allowing it to drag and move any transportable object between including small haystacks, other goats, humans, or even tractors. Ah, let’s not forget the ability to indiscriminately bleat or faint on command when it seems appropriate.

Added to these basic skills are bonuses scattered around the map a bit: they won’t necessarily help you in your exploration, but they are certainly elements that break the monotony of wandering through the levels. Among those we’ve seen in action are a saddle that allows any other playable character to ride our goat, and a bazooka.

If you’re in a hurry or need to drive a long distance, don’t worry, because in Goat Simulator 3 the goats also have a driver’s license and can drive any means present in the game, or decide to act only as a passenger. In any case, seeing a tractor with an open drive has its reasons. Of course, there is also a teleportation system, and useful points will be all unlocked towers or a guest player if you play multiplayer.

How to get rid of the Billy Goat?

On this vast map, the developers liked to hide a large number of collectibles which, once found, will become part of our collection and will mainly provide cosmetic options. Interesting, among other things, is the ability to completely change the animal and decide to play as a pig, a giraffe or a hammerhead shark on a skateboard, for Tony’s Shark friends. 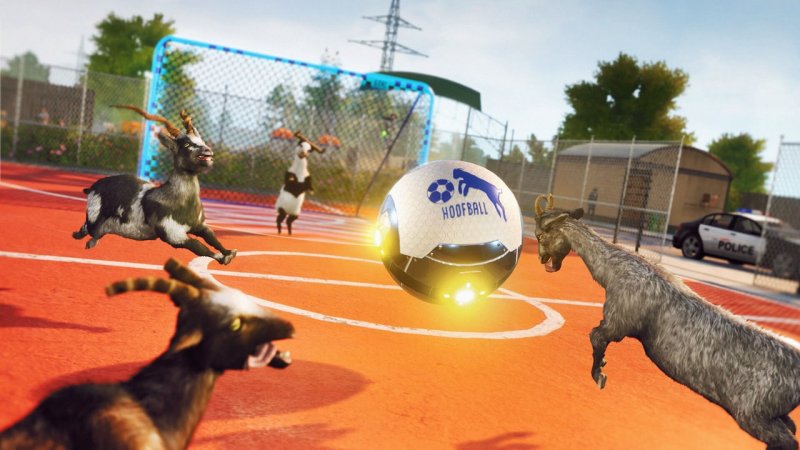 The Goat Simulator 3 minigames are numerous and very entertaining.

The great news about Goat Simulator 3 is that you can experience it all in a company. The choice is always up to the player, who can decide whether to face the experience alone or in multiplayer in the company of up to three other friends. They must be part of the friends list of the platform you will be playing on: it is our understanding that at the time of release the multiplayer mode will have this limitation and there will be no type of matchmaking for the game. goats outside our circle.

I must say that this is not a big problem, because there is a lot to do in Goat Simulator 3 and with the right group of friends it will be difficult to decide to go in search of a story quest, because the temptation to constantly challenge each other. with i mini games. They are scattered around the map, and once unlocked, any goat can activate them: if there are other players in the game, they will be asked if they want to participate in the event. If the answer is yes, they will be teleported to the location of the mini-game. We played three car derbies and, admittedly, would have done the same. 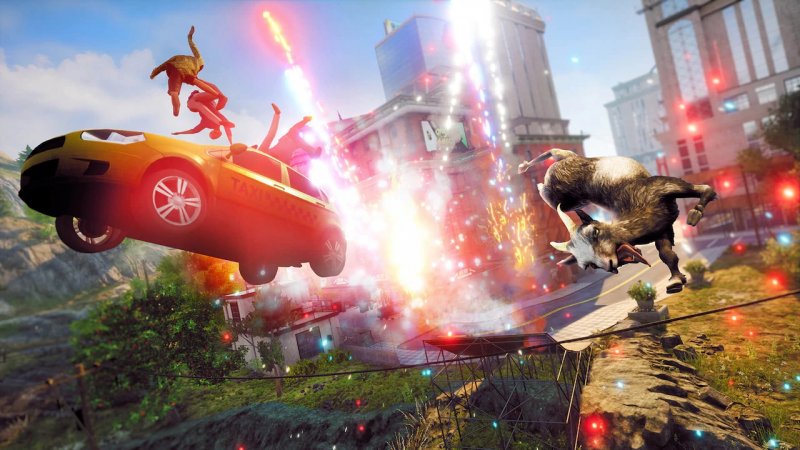 Does the Linux kernel have a main function?

However, if you think this type of game, made of madness and especially broken ragdolls, was a walk in the making, we have to tell you. The developers, in fact, told us that the programming of the multiplayer part was not at all easy due to the fact that all game elements are present on the map. As already mentioned, Goat Simulator 3 is not a game that focuses on technical cleaning: during our test, we saw people walking crookedly, goats with very long necks, we even got stuck with a car in a river (but we said back to the right channel, dragging it with tongues), but all this did not seem out of place. Despite this great chaos, everything is still playable and fun, and the confusion that can come up in a Goat Simulated 3 game is very high. That’s why multiplayer was so hard to make, because it all has to work at all times, with or without friends in the game.

Goat Simulator 3 is the craziest game we’ll see in 2022, and we’re sure of it. Everything created by Coffee Stain seems to answer the question “why not?”. Goats on tractors? Why not. And goats with jetpacks? Why not. In the big and rich world of Goat Simulator 3, everything is allowed, and it is this huge freedom, combined with an extensive map and numerous special bonuses, that really makes the game truly enjoyable. So the multiplayer element opens up even more absurd scenarios, and we can’t wait to explore that potential.

If you liked reading Goat Simulator 3: we tried the craziest game of 2022 with goats as the main characters